Home » Gadgets » What is the difference between Apple Watch 8 and Ultra?
Gadgets

What is the difference between Apple Watch 8 and Ultra?

Both of the gadgets were revealed by Apple on September 7 at the Apple Event and are now both up for pre-order. So, you might be curious about how these two gadgets differ. The Apple Watch 8 and Apple Watch Ultra are different from one another in terms of appearance, features, battery life, and of course pricing. 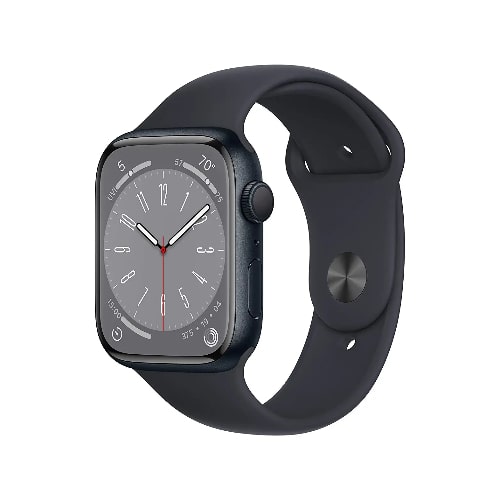 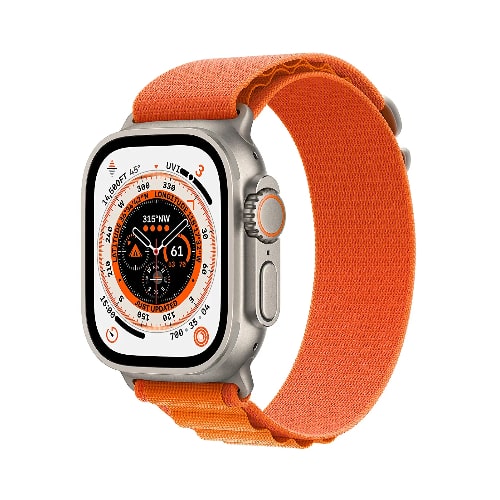 The cost is one of the biggest differences between the Apple Watch 8 and the Apple Watch Ultra. The Apple Watch Series 8 comes under 46,000 Rs, just like many of the best Apple Watch flagship models that came before it. Both the 41mm and 45mm sizes come under 50,000 Rs cost for cellular connectivity.

There is only one cellular model that comes under the 90,000 Rs price tag for the Apple Watch Ultra. We’ll remark that Stainless Steel, Titanium, or Edition models of the Apple Watch have been as expensive, even though it’s somewhat expensive in comparison (or more expensive.) 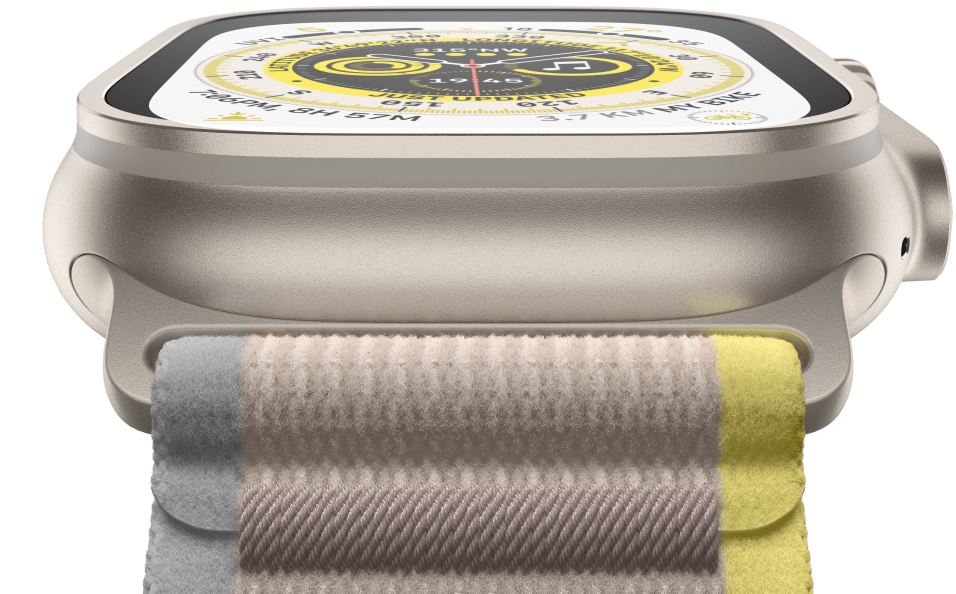 These timepieces cannot be mixed up based solely on appearance. The Apple Watch Ultra design gives Apple’s smartwatch a completely different look, in contrast to the nearly similar Apple Watch 8 and Apple Watch 7 designs. It is advertised as being equipped for outdoor adventures on any surface.

The Apple Watch Series 8 features the typical digital crown and side button on the right side of the case, which is another obvious distinction. The digital crown on the Apple Watch Ultra, on the other hand, is larger and has more distinct grooves; it is now mounted on a projecting extension beside the standard side button. A visible speaker grille and an additional action button that can quickly launch a designated feature are both located on the left side of the device. The best Apple Watch bands may be added to both the Apple Watch 8 and Apple Watch Ultra, however, the latter does have a special selection of straps that appear to be designed for particular outdoor sports.

The features that are the same between the Apple Watch 8 and Apple Watch Ultra will be discussed first. Both watches run watchOS 9, including the new skin temperature sensor, new crash detection emergency function, a familiar set of communication choices, support for the top Apple Watch apps, a full suite for fitness tracking, and more. They also both run watchOS 9. They are fundamentally comparable gadgets.

Even the updated compass software, which now has a trackback capability and allows you to record waypoints, is included with both watches. The Apple Watch Ultra is the only model that supports the newest GPS protocol (L5), which promises to provide the most accurate location data of any Apple Watch to date.

The new siren app on the Apple Watch Ultra uses the speaker we discussed in the design section to emit an 86-decibel alarm. It is said to be audible up to 180 meters away. This siren offers an extra layer of security, even if you are used to using the Apple Watch in an emergency.

Additionally, a Depth app is available just for the Apple Watch Ultra. Since the device is waterproof up to 100 meters, or twice the depth of the Apple Watch Series, it may automatically begin monitoring a dive while it is less than 3 feet deep.  Apple is working with Huish Outdoors to make the Apple Watch Ultra an on-wrist diving computer as well. The Apple Watch Ultra is quite specialized, but some of the best Garmin watches for diving have a following, so we anticipate it will too.

Even still, the Apple Watch Ultra looks to have the best features for those who love being outside. Outdoor activities including hiking, mountain climbing, trail running, and water sports are the focus of almost all of the novel software features. 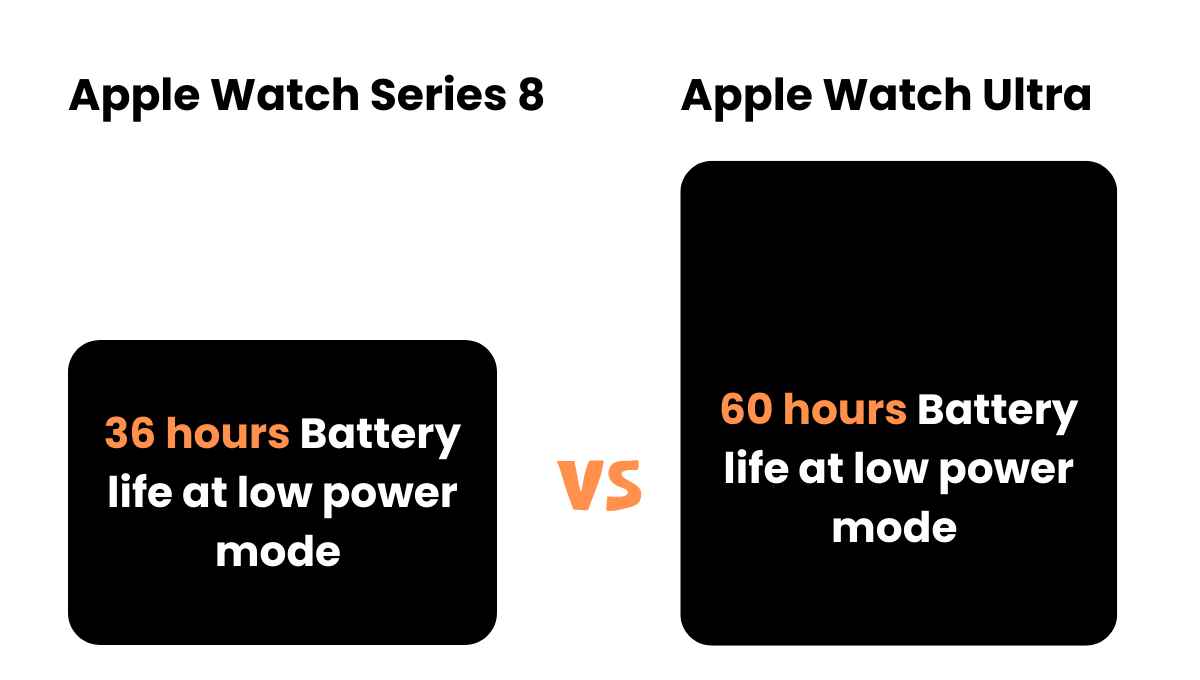 The Apple Watch Series 8 lasts up to 36 hours and the Apple Watch Ultra lasts up to 60 hours when the new Apple Watch’s low power mode, which disables battery-draining features like the Always On Display and automatic workout-tracking, is enabled.

Although low power mode effectively extends the battery life of iPhone and iPad devices, its efficacy for Apple Watch is currently uncertain. We’ll test this once we have these smartwatches on our wrists.

Which Apple Watch is the best right now?

The most recent Apple Watch, the Series 8, is the greatest. The Apple Watch Series 8 sports a new skin temperature sensor that informs cycle and sleeps tracking in addition to Apple’s activity tracking sensors, an FDA-approved ECG monitor, an always-on display, and a dedicated App Store. Additionally, it enables the new Apple Watch low power mode and has crash detection.

The Apple Watch SE (2022) lacks the majority of these functions, yet it is still a viable alternative and maybe the finest Apple Watch for new users. It has a starting price of $249 (AU$399) and costs $299 (AU$479) less than an Apple Watch with LTE. Additionally, it gains from watchOS 9 and all the top Apple Watch apps.

Therefore, your choice right now is between the Apple Watch Series 8 and the Apple ultra. See You have seen above, how they contrast below in detail.

There are currently five things where the Apple Watch outperforms the competition.

Even while the Apple Watch won’t go on sale for several more months, if it lives up to expectations, it will far outperform other wearables.

Any concrete information we currently know on the Apple Watch comes directly from the company, and its delivery is still more than four months away (at the earliest). Important information, including battery life and the kind of connection the watch employs with your iPhone, is now kept a secret. When we initially strap one of these devices to our wrists, we honestly have no idea how a sizable portion of the interface functions or what to anticipate from it.

But at the iPhone 6 launch event, Apple spent more than an hour discussing its newest product category, giving us a good idea of what the corporation has in store for its first-ever wearable. If done well, several of Apple’s innovations in this area might potentially beat any other smartwatch now available. Here are the five areas where the Apple Watch truly excels in comparison to the competition.

With a portfolio of models and bands that is remarkable in its commitment to customization, the Apple Watch surpasses all of this. The watch is available in two sizes, with a choice of six different straps and one of three finishes (stainless steel alloy, aluminum alloy, or 18K gold) (sport band, leather loop, Milanese loop, minimalist leather classic buckle, leather loop, leather modern buckle, stainless steel link bracelet). All of those bands fasten in various ways, and some are offered in many colors.

A new attachment method that is straightforward and reminiscent of Apple’s design makes it possible to swap out one strap for another. The straps have protruding end caps that fit into the Apple Watch’s deep slots and are secured in place by what appear to be spring-loaded grab plates on their inner faces.

This was briefly mentioned in the customization section, but it warrants its subsection due to its significance. Many of us have been curious about the smaller average wrist size of the other half of the world’s population—women—ever since smartwatches entered the mainstream.

For instance, it’s pretty cool that pressing a button on the side of the watch displays a list of your friends who also own an Apple Watch, and you can quickly double-tap the display to contact any of them with a gentle vibration. You can contact them, use Siri to dictate a text message to them, or make a direct link with them using the walkie-talkie capability of the watch (a more accurate solution than some others on the market). If you’re signed up for the new Apple Pay service, you can also make purchases using the NFC chip on the watch.

Apple’s new wearable interface is built on a predictable foundation: the sapphire-fronted watch face is dominated by a touch screen that responds to taps and swipes, exactly like the majority of other smartwatches on the market. But the similarities stop there. Apple’s new display responds to pressure as well, recognizing a firmer push as a kind of replacement for the long-press technique that is now popular.

Tim Cook didn’t claim that his business had created a flawless product. Apple’s watch, according to him, will “redefine what people expect from its category,” he claimed. That may not be a particularly high bar to set, given the public’s low expectations for wearables thus far, but if even half of the aforementioned standouts fulfill their promises, he will have been correct.

Which is the Best CCTV Camera in India?

Which is the best headphones under 10000 In india?

We will be happy to hear your thoughts

Which are Top 7 best DSLR camera for beginners?

Top 5 Best Iron Boxes under 1500 in India (Research Based)